The FitzGeralds were or maybe still are a very rich family having the roots of their fortune in land and houses. John Purcell married Mary FitzGerald and took her name. Interestingly, the Fitzgerald estate in Manchester ended at the boundary wall of the house where I was born. I was always closer than I knew to the FitzGeralds…The most famous son of this union was the poet/translator Edward FitzGerald, famous for his translation of the Rubaiyat of Omar Khyyam, the Persian astronomer-poet. Edward was a friend and contemporary of Wordsworth, Crabbe, Bernard Barton (he was briefly married to Barton’s daughter, Lucy), Carlyle and Tennyson. The Suffolk poets. Based at Boulge near Woodbridge and later in Woodbridge, Edward was a prolific letter writer and his published letters are a delight to read. More recently, my great uncle and aunt were Ernest and Esie FitzgGerald. Dr W E Fitzgerald was the Medical Officer for health in Southport up to the end of WWII. He was in the trenches of WWI and was blinded for a year by mustard gas. A brave and dedicated man. Aunty Elsie was matron at a Fever Hospital is Southport, where she met her soulmate.

In the grounds of the demolished Boulge Hall lies this church, financed by the FitzGeralds and full of their family history. In the grounds is the FitzGerald Mausoleum. We arrived at the church one Friday evening when the weather was dull and grey, much to the amusement of the caretaker who assured us that the sun would not shine. A little faith rewarded us with just five minutes of delightful low sunlight, which licked its warmth across the church just briefly whilst we took our pictures. A magical moment.

Edward FitzGerald, referred to as EFG from this point, lived at Boulge Cottage as he liked to be private and did not want to live at the hall. This picture dates from the original cottage and bears little relation to the one that occupies the spot now.

Situated in Woodbridge, Little Grange was taken over and extended by EFG and was to be his home for many years. This picture is contemporary from his time there.

And here is Little Grange as it looks today – a very fine house indeed. It is interesting to note how a Victorian gentleman assessed his needs and in fact described this vast property as small…

It is now occupied by a retired Doctor and his wife, and I thank them for being so courteous and allowing me to photograph their home.

EFG was a man of the sea, and loved to meet and drink with the local fisher-men. This was his boat The Scandal, in which he travelled to Europe as often as he could. Sometimes he lived on the boat for months at a time, only returning to the land when winter set in and he was forced back to his lodgings or to Little Grange. It was this relationship with the sailors and particularly with one “Posh” Fletcher that gave rise to the wide acceptace that EFG was homosexual. Framkly, I don’t believe it. Having read all of his published letters (and there are a lot of them) my feeling was that his open and affectionate nature to those he liked could easily be, and has been, misinterpreted.

This is EFGs grave in the grounds of Boulge Church. Characteristically he was not buried in the family mausoleum, which is just behind us, but lies separately in this simple and unassuming solitary grave. At the head of the grave lies a rose taken from a cutting brought from the grave of Omar Khyyam in Nashapur, Persia, now known as Iran. The rose is ailing these days and I am told that an expert has been called in to attempt to treat it.

Many people travelled to the grave as 100 years passed from EFGs death, but now the church and its grounds are quiet once more.

The Balfours are only connected tangentially to the FitzGeralds. My Great Aunt Elsie married her Dr FitzGerald on 31st December 1940 in a quiet ceremony that no-one knew about, not even her sister Minnie. They then went back to work and lived separately for three months before the world was told of their union. Minnie Flletcher became Minnie Balfour when she married Jack Balfour, a dentist. Jack’s father, Andrew, is shown above, and his tale is told elsewhere.

Omar is the 11th century astronomer-poet of Persia and his quatrains have become famous in the west through the exotically free translation of EFG. This is by no means a literal translation but more of an expression of the feeling and passion of the original, presented in a form that can be understood by western minds. My favourite quatrain remains:

“The Moving finger writes, and, having writ, moves on. Nor all your piety nor wit shall lure it back to cancel half a line, nor all your tears wash out a word of it.”

WEF had several claims to fame. An Army Doctor in WWI he was gassed in the trenches whilst trying to save lives and as a consequence was blinded for a year. Later in life the mustard gas took its toll and he suffered badly with respiratory problems which finally led to his death in 1959.

None of this stopped him becoming Medical Officer for Health in Southport and marrying his Matron Elsie Fletcher (of whom more in the Balfours section) on 31st December 1940 at Scarisbrick church. By a Canon no less and in total secrecy from family and friends alike. They lived apart after that for three months before buying a house and settling into a long and very happy retirement. WEF was my Great Uncle.

Highlights of their lives they have many, including WEF gaining an OBE and dining with The Queen. Much of their memorabilia is in my personal archive and I will be adding snippets to this web page from time to time.

In her last years we looked after my Great Aunt Elsie, long after she was that fiery Matron in the Fever Hospitals and when she had become an affectionate elderly Aunt.

The above fine and elaborate document commemorates the retirement of Dr William Ernest FitzGerald, M.C., M.B., Ch.B., D.P.h., Barrister-at-Law, as medical Officer of Health over a period of thrity-two years. It is signed by the Mayor and Town Clerk of Southport and is dated 30th September, 1952. It is a lovely document and I will share more such documents via this website in the future. 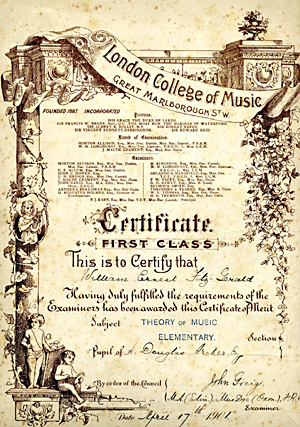 This document, dated April 17th 1901, is WEF’s First Class Elementary Theory of Music certificate from the London College of Music.

There are hundreds, if not thousands, of versions of the Rubaiyat available. Even today Amazon has over 200 different editions. There are five editions of the poem and the number of quatrains varies between them. many editions have all the variations – these are the ones of choice. After that, try EFGs letters, also available in many editions. The Platonic-style dialogue Euphranor is also an interesting read. Salaman and Absal, the story of Solomon, is an easy read to modern minds. Some of the other stuff is much more obscure and poems like Bird Parliament do not appeal, to me at least.