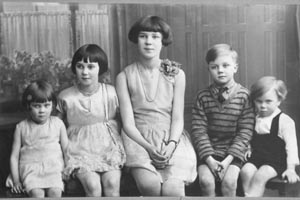 My side of the family are the Rileys, who originally lived in Weaste, Salford, in the days when Weaste Woods existed and apparently covered a fair area of ground.

In the 1950s and 1960s when I was growing up, the five siblings and their respective families stayed very close and shared quite a bit of time together. Then, gradually, people moved away, became involved elsewhere and ended their lives far from the original nest.

Here are the details of the Rileys…….the picture above shows Pat (originally Hilda), Judy (originally Edith), Doreen, Arthur and Jack.

My grandparents on my father’s side. Arthur Riley was an engineer who was forced into retirement at the age of 40 after being diagnosed with heart disease. He lived to be 80, which had always been his ambition.

Mary Riley worked. She sewed, sometimes 24 hours straight for up to three days. She was still making dresses in the 1960s. Every Sunday I would go down to her house in Weaste and we would have lunch. Always a chicken, always cheese and biscuits to follow, the biscuits being Crawfords Digestive. We got on very well, and she remembered that even to the end. The last thing she ever said to me as she lay dying in hospital was, “We always got on very well together, didn’t we?” and the last thing I said to her in reply was, “Yes, we did.”

Arthur and Mary Riley, circa 1963. Kodak Brownie Junior 620 with Verichrome Pan film. My Grandfather was being held up here as he was really too ill to stand outside the back door and have this image taken, but the image persists for all to see which has to be a good thing.

My Aunty Emily lived in Liverpool and was Mary’s sister.

A lovely lady, she always seemed old to me but she probably wasn’t. I remember her front garden, filled with lupins. And her cold, cold house filled with trinkets and ornaments.

Her son Bob lived in Canada and I met him several times in the 1960s.

This one is easy, as they were my parents. My father died in 2006 but my Mum lives on in happy retirement.

Arthur was a Dental Technician with a very high degree of skill and did work for many high profile dentists such as Phil Wander, Alan Dobkin, Peter Kurer and Hans Kurer, OBE.

Doreen was the eldest daughter and she married Bill Parfitt. Sadly they have both died now. I wonder if anyone remembers “Doreen’s” on Cross Lane in Salford, a knitting and childrenswear shop? The whole story is somewhat more complicated. Doreen’s first husband was Arthur Haynes and their son was Kit. Divorce followed and Doreen married Bill Parfittm duly adding Pat and Trevor to the family.

My cousins Pat and Trevor are still very much alive, although the eldest cousin Kit is sadly no longer with us.

I spent a lot of time with this part of the family in my teens and they were very good days.

Pat was the youngest sister, and my Dad considered it his duty to look after her as a teenager. I’m not sure if she saw it the same way, I must ask…Pat told me a story of how my Dad took her to dances and acted as her chaperone. One evening he said he had to just pop over somewhere to see someone and he’d be back in a moment to take her home. Some 45 minutes later he returned, looking very red faced and flustered and pat was very impressed that he had run all the way back to her…..Another anecdote was that he would always insist he took pat home, and explained to any girl that before he could walk her home he had to see his sister safely back. What a guy, i’m sure they were suitably impressed!

Stuart died some years ago. He was a massive Sinatra fan. Oh, and he was always first at the buffet table at family parties. He also had a great ability to say the most outrageous things about people and sound as if me might be joking. I think he was deadly serious!

My cousin Keith is a high-flyer indeed and lives in London, as do his two lovely and very successful daughters Cathy and Martha.

Both no longer with us, but my cousin Susan is to be found alive and kicking in London.

Tom was an area manager for the Co-op. In his youth I’m told he was quite the dashing figure, the Errol Flynn of the family. The pictures from the war years, found in the Gallery, would seem to confirm his status as the family member with Holywood looks.

Jack was the baby of the family and therefore could do nothing wrong. You could not wish to meet a nicer person, and he was superb with children. He used to tell me stories when I was a small child and my favourites were the tales of Brickie and Big Black Jack.

Cousins Lesley and Ian are out there!

Me handing a horseshoe to my Aunty Norah on the occasion of her marriage to Jack Riley. Behind Jack is his Best Man. Behind Norah’s head is Christopher (“Kit”) Parfitt, Trevor’s older brother.

The person I spent most of my time with was my cousin Trevor. We came through our pretentious poetic stage sometime after 1968 and even at one time tried to write a book together. It was dreadful and never was completed.

Trevor moved away to Egypt for several years after he gained his PhD and he has been something of an academic. Currently he has been working in Thailand.

The Riley family is working on reaching its potential!

This means that there are no claims to fame…yet. 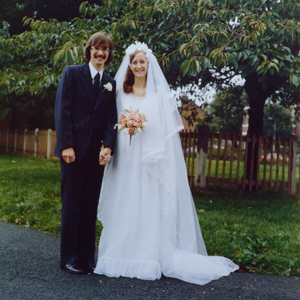 There are lots of images in the Gallery of the various family members.